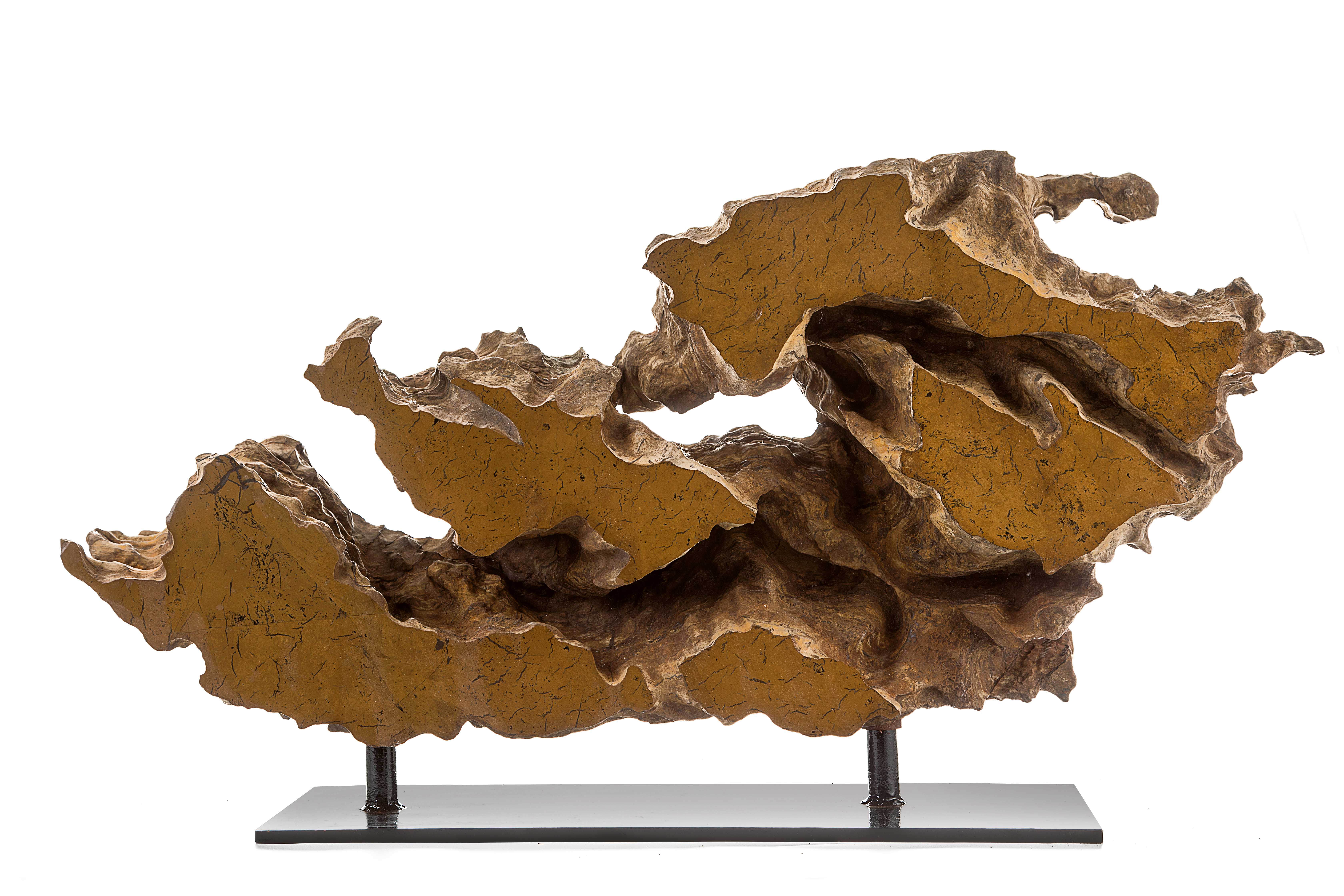 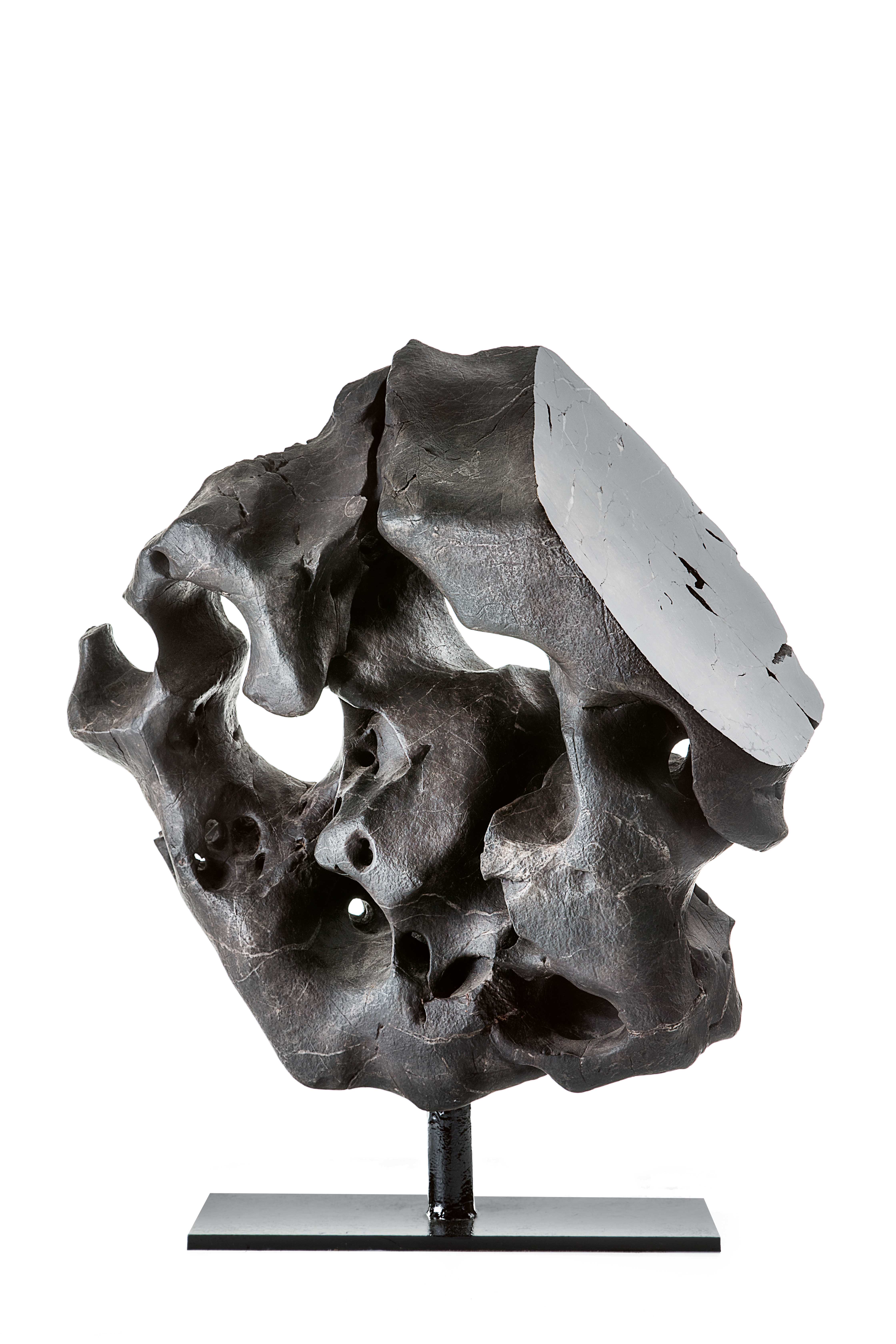 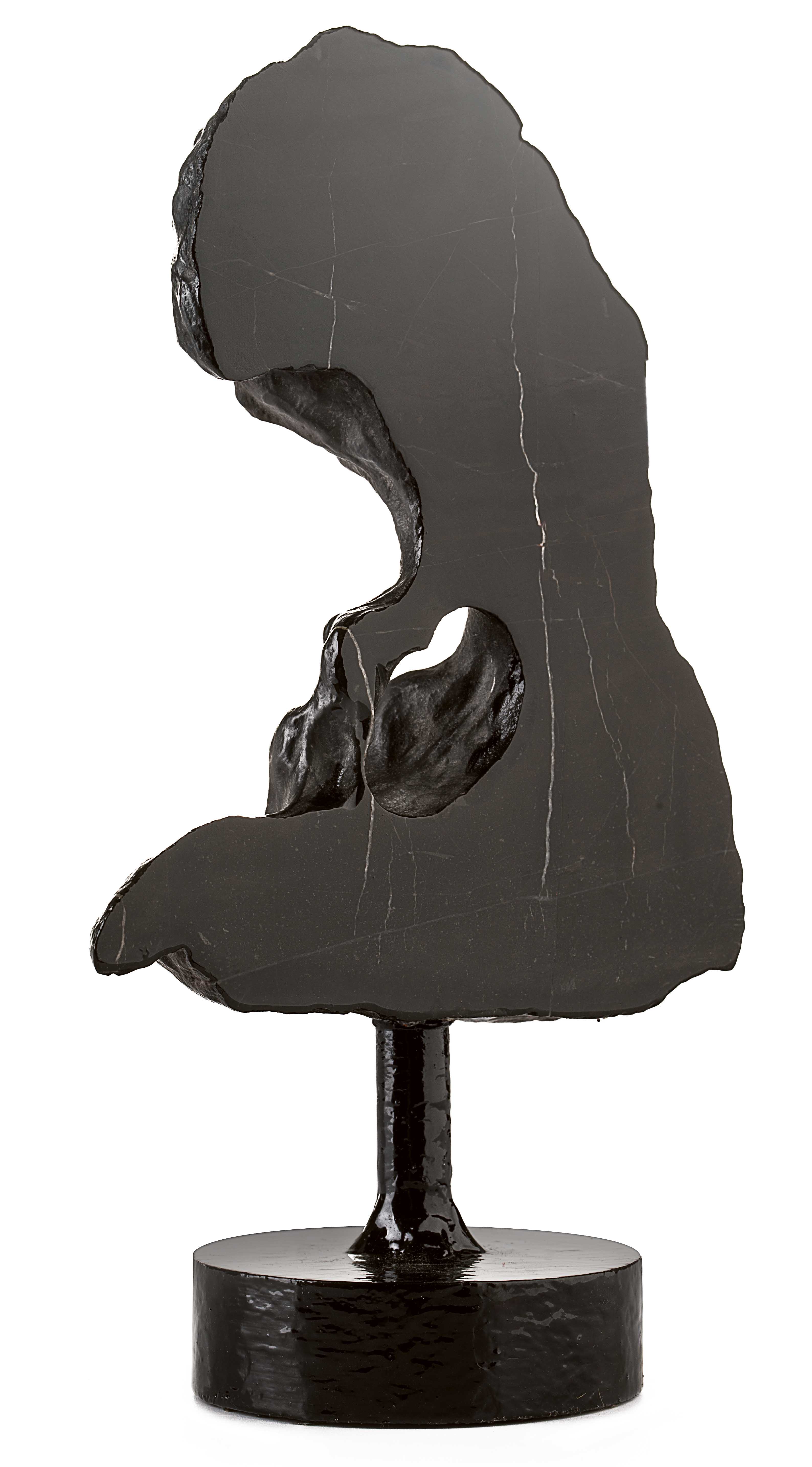 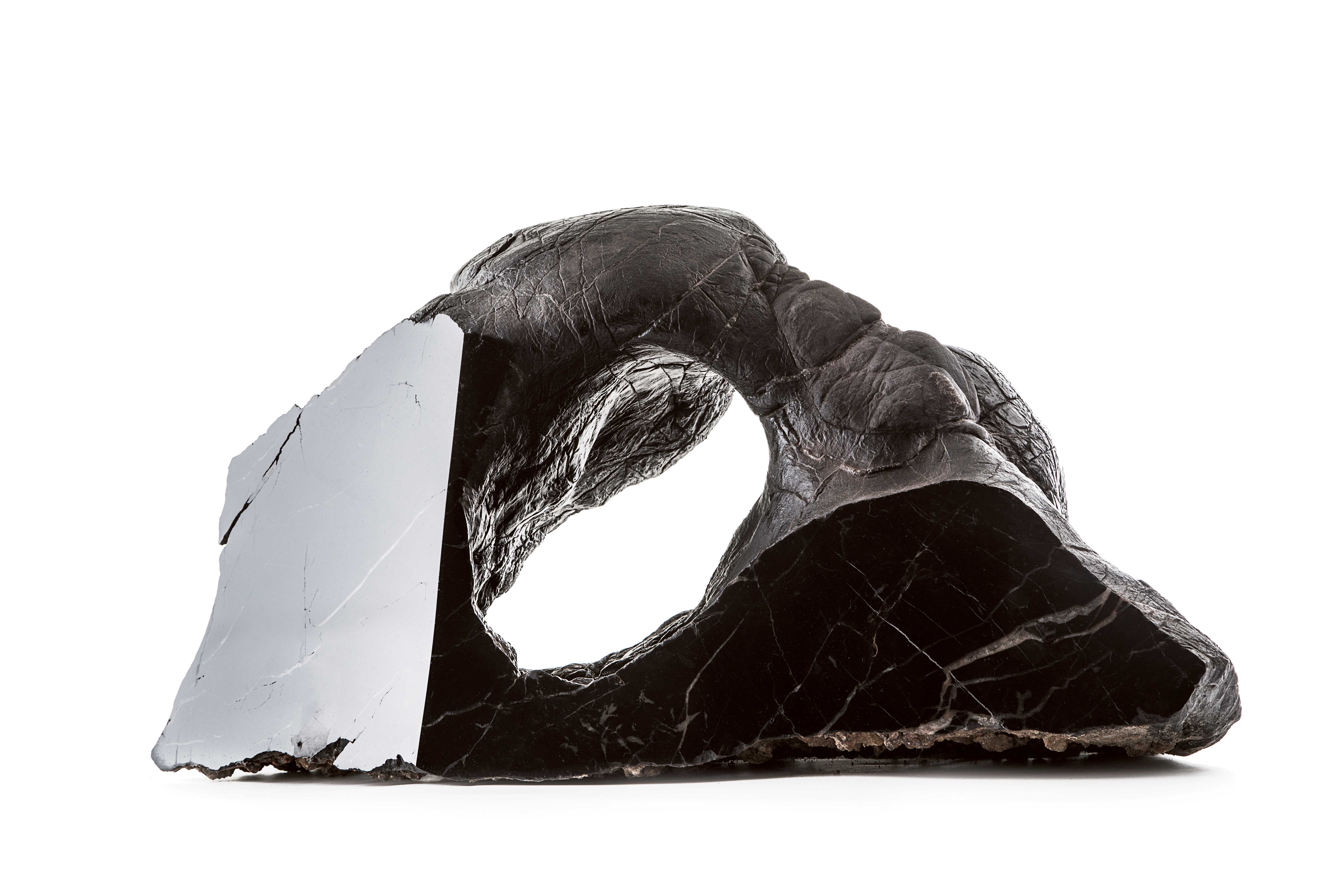 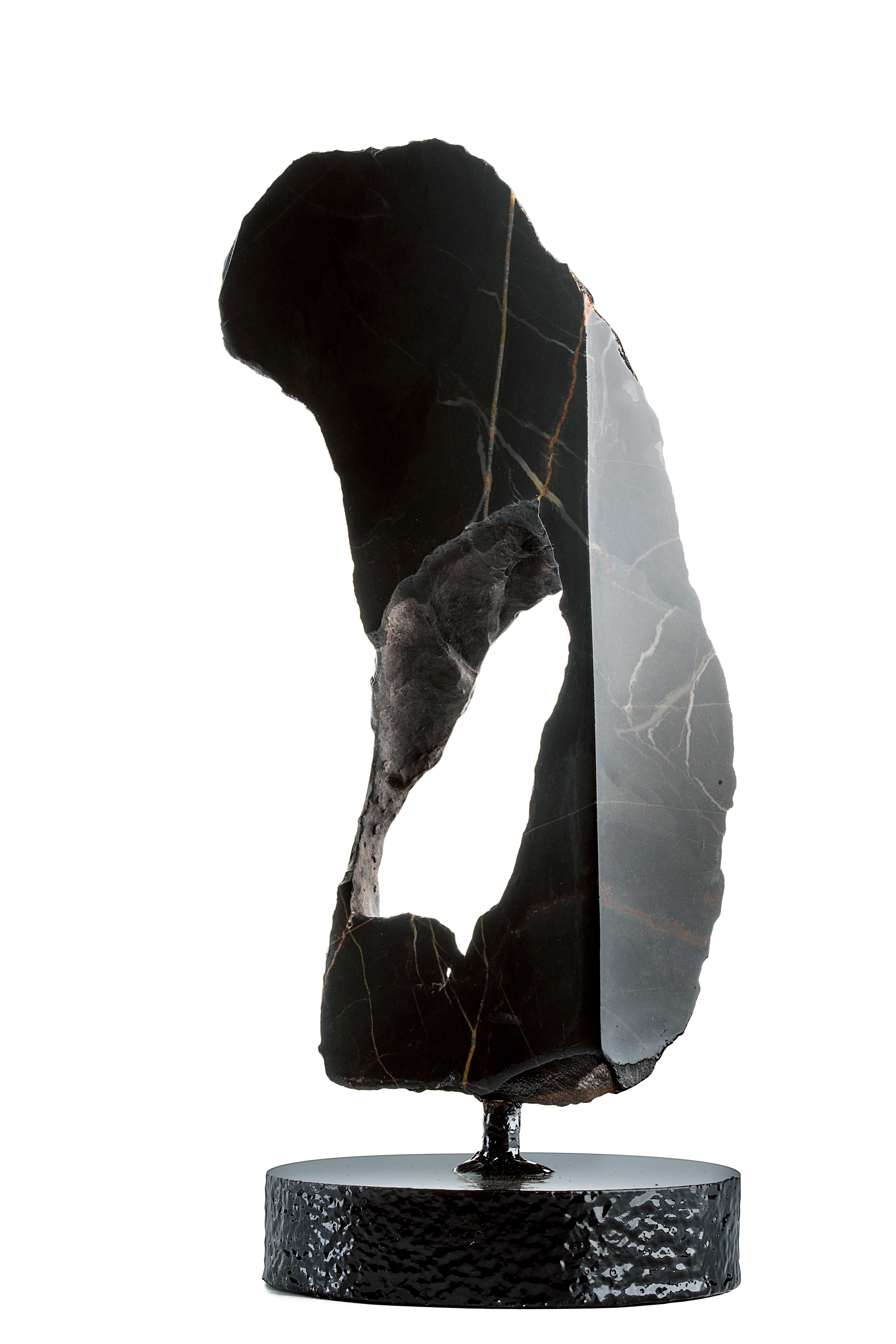 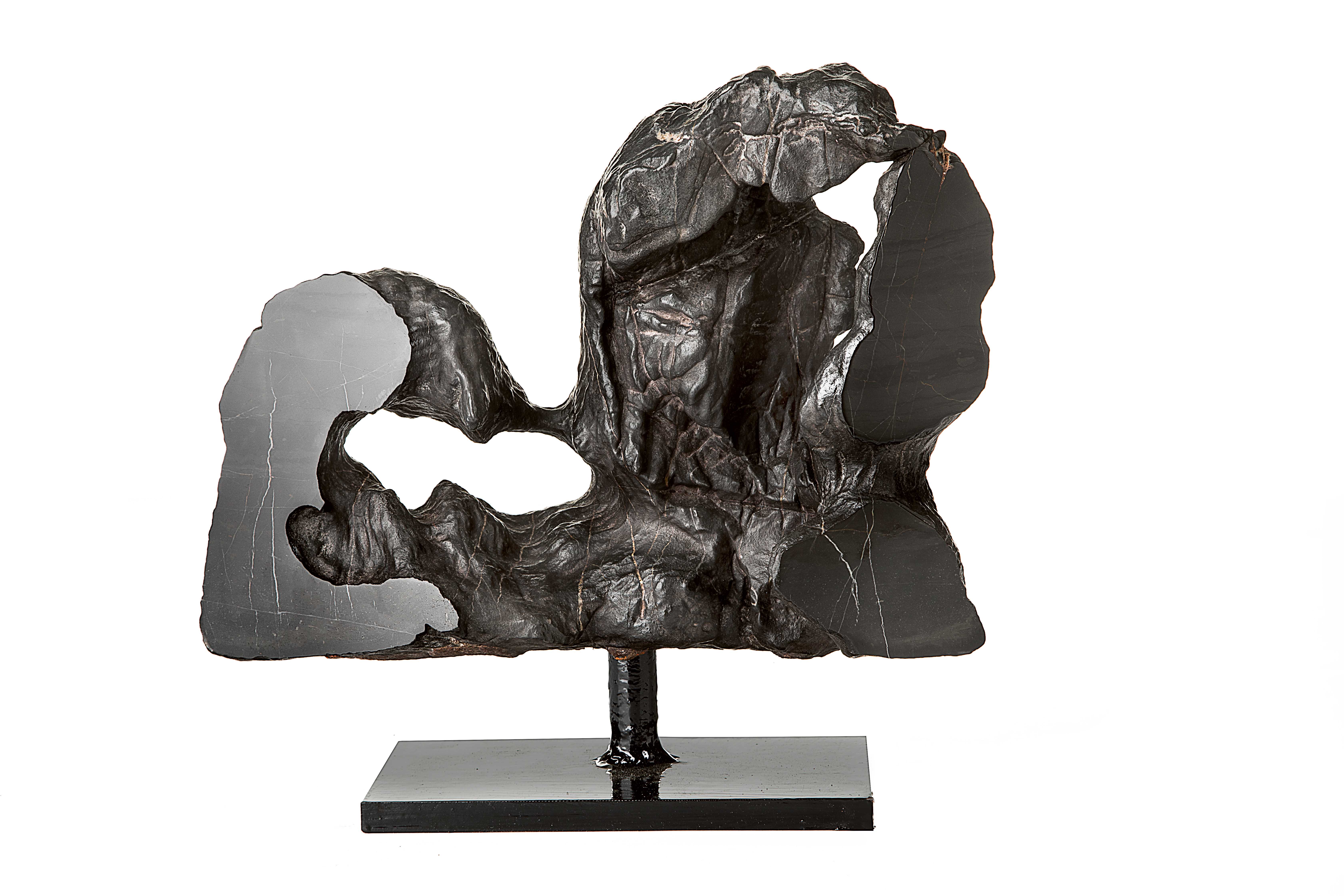 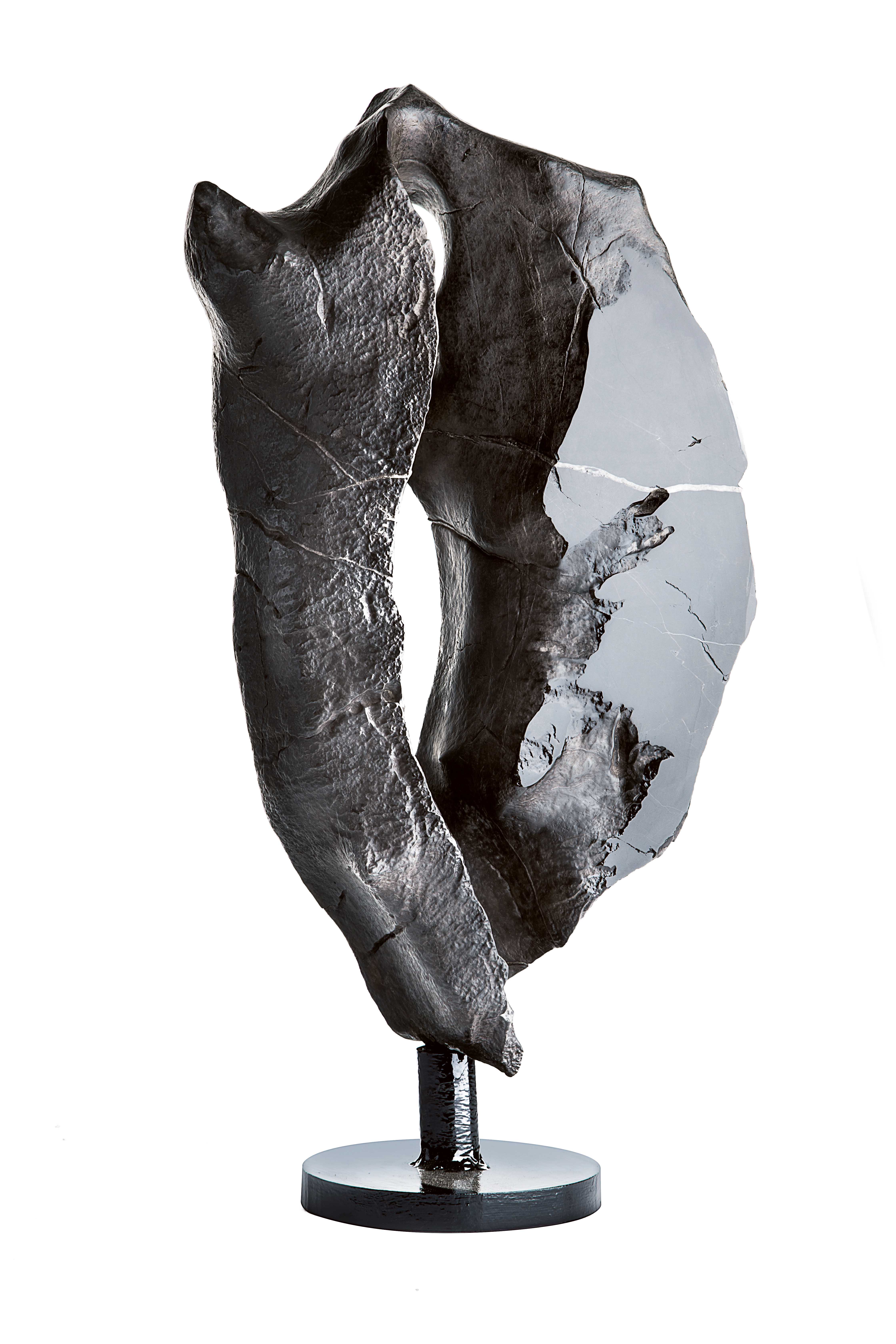 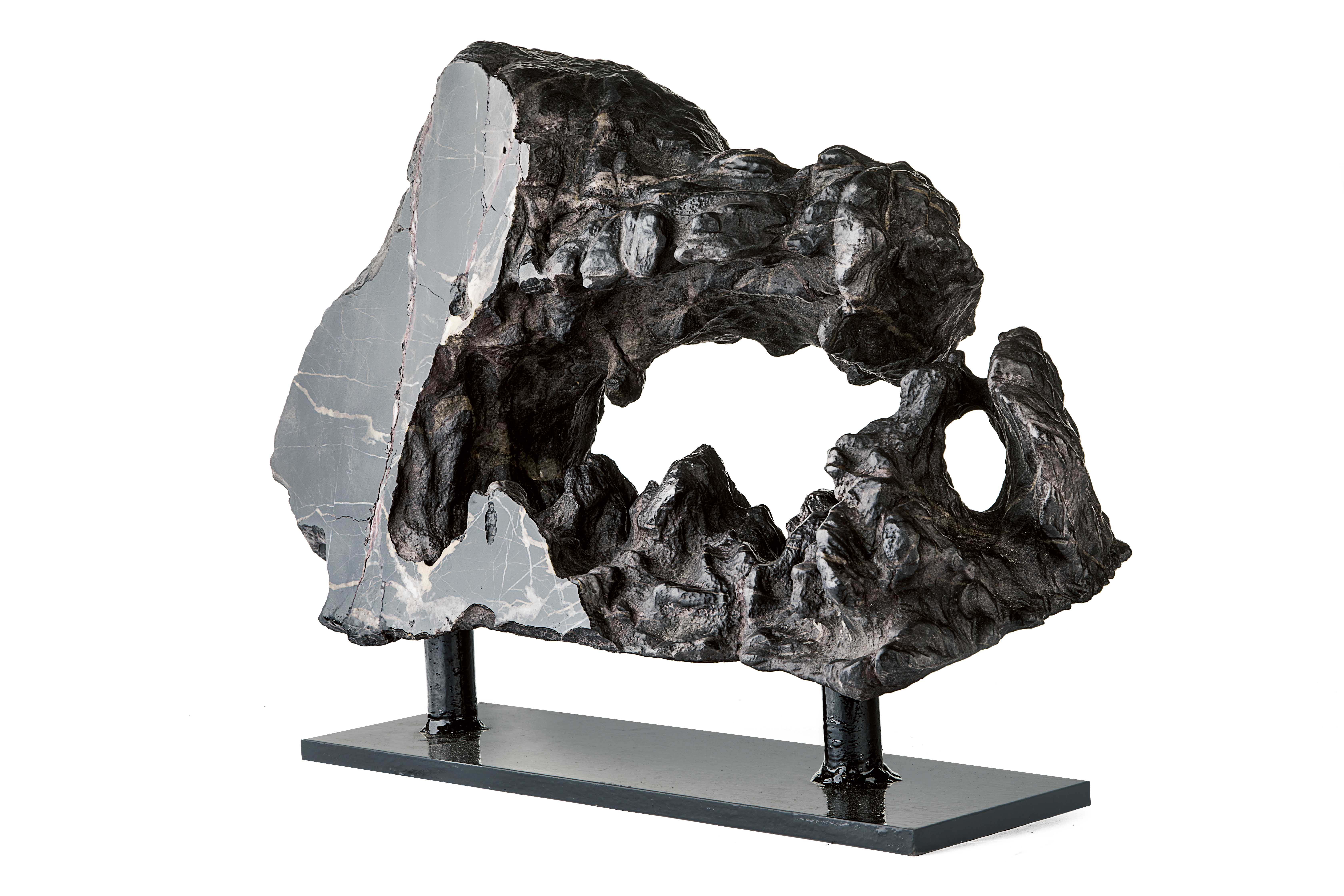 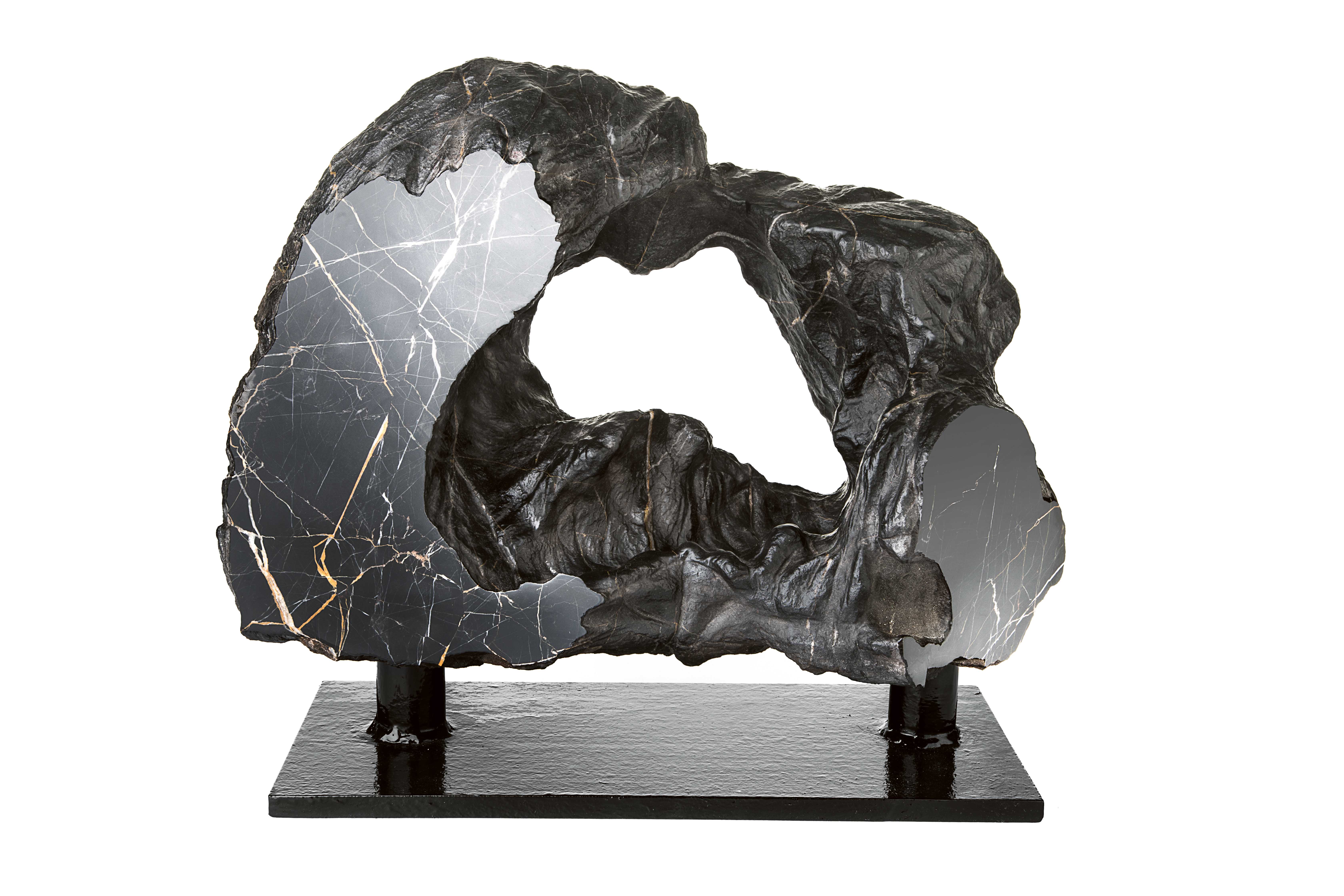 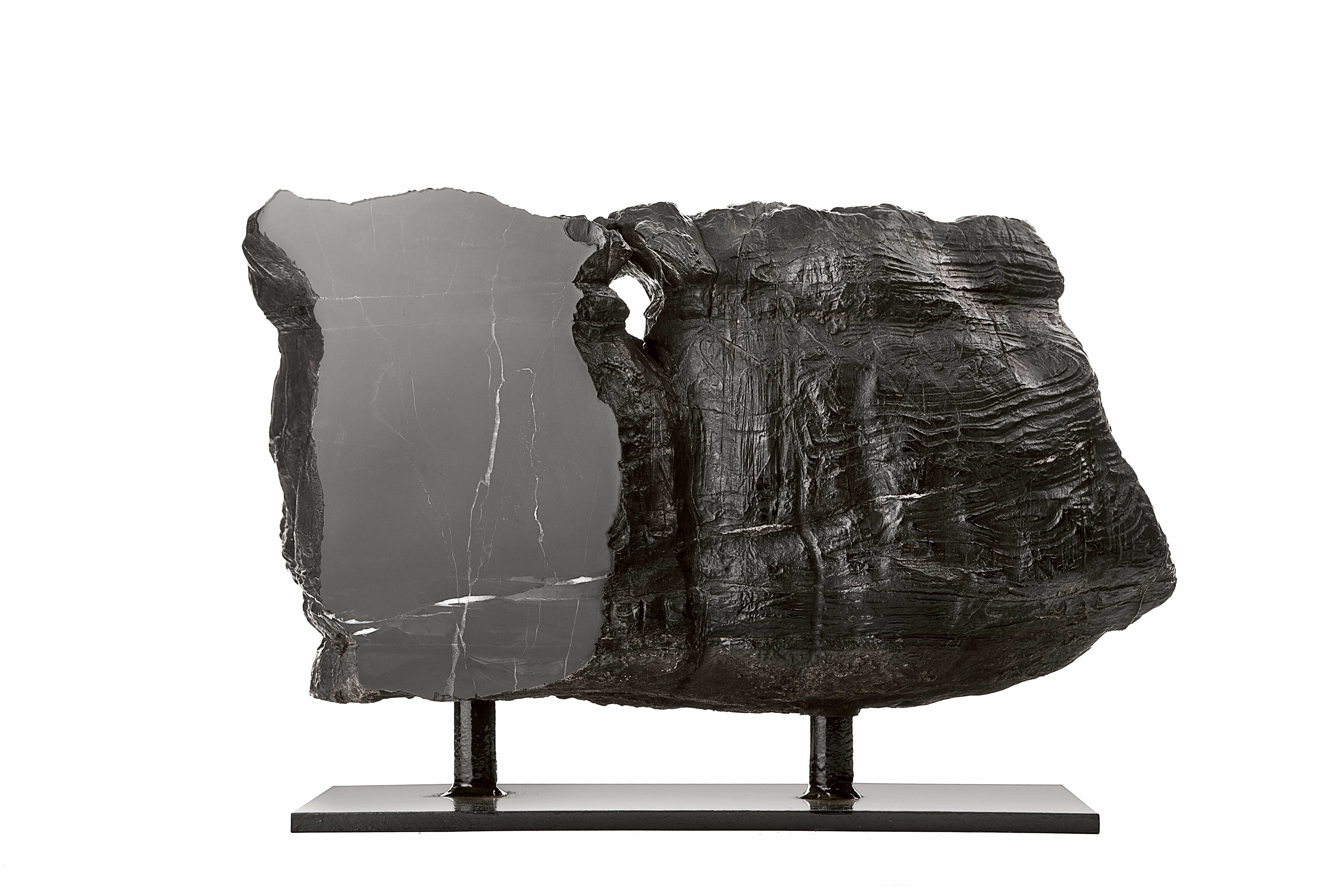 The origin of collecting Chinese scholars' rock is hard to trace, although it started to appear in historic documents, literature and paintings in the Tang Dynasty; the authentication standards and the aesthetics criteria of scholars' rock was established in the Song Dynasty. The first comprehensive study of scholars' rock, Yunlin Shipu (Yunlin Rock Catalog), was published in in the. early 12th century. It ranked Lingbi Stone high among all types of Chinese scholars' rocks, because Lingbi was associated with the description of "sounding stones that [seem to] float near the bank of Si (Si Bing Fu Qing)" mentioned in Shang Shu (Classic of Documents), which not only gained Lingbi legitimacy in mainstream culture, but also made it the most appealing collectible to the elite. Therefore Lingbi Stone has been considered as the symbol of Confucian ritual, the desktop decoration of the elites' study and the passage that links the literati's inner mind and the cosmos, but never as an individual artwork to be appreciated in its own right.

Mr. Masaru Takanashi is an expert in Chinese scholars' rock. With the knowledge of scholars' rock's thousand-year history, he has published a number of studies and catalogs on the topic. In his Classical Chinese Stones, he thoroughly explored and meticulously discussed the scholars' rocks' shape and texture, original production locations, aesthetics styles, text and image documentation, as well as the technic details such as the carving and coloring process and the making of the stand. However, Takanashi did not let scholarly research work limit his artistic creativity or cloud his judgment. What he has found is that after the Song Dynasty, the development of Chinese scholars' rock stalled in both aesthetical appreciation and technical studies. The strong, sometimes stubborn conventional and inherited tastes became burdens and obstacles that constrained artists' creativity and imagination. Takanashi is not satisfied with the status of Chinese scholars' rock in today's world. Having a deep understanding of its Chinese culture context, he turned to western contemporary art, especially contemporary sculpture for reference and inspiration. He has studied the role stones played in the art of Henry Moore, Constantin Brancusi and Isamu Noguchi, and created a unique body of works that is impossible to categorize by traditional medium, which we called stone works.

The success of an artwork is primarily defined by its creator's artistic choice and judgment. In Masaru Takanashi's stone works, he altered each stone's shape, texture and volume by applying a bald "one cut" on a material that has existed for thousands of years. His cut made these Lingbi Stones contemporary artworks with strong individual style, which also reminds viewers of the decisive "one cut" (or several cuts) Italian artist Lucio Fontana applied on his canvas. Here presented, the 2008 No. 001 completely changed the stone's original shape with two new smooth surfaces created by the artist; another piece, the only yellow Lingbi Stone included in this show, was cut open entirely. While its original configuration and texture was disturbed, its openness and accessibility was displayed to the audience. These Lingbi Stones became various different artworks under Takanashi's work. The artist did not shrine them as natural treasures, but treated them as an artist's medium with bold ideas and decisive cuts. He used smooth surfaces and geometric lines to replace natural furrows and grooves, and shifted the traditional focus on natural hollows and perforations to the pursuit of volume and tension in space. In doing so, Takanashi made these ancient scholars' rocks alive and relevant in a contemporary context.

Although precious Lingbi Stone has its nature beauty, it is the artist's intervention that consciously constructs and creates beauty in art history. In these works, Masaru Takanashi broke the convention "admiring the nature" that guided the appreciation of Chinese scholars' rock for centuries, and reshaped the contemporary audience's appreciation of Lingbi Stone. What he truly tried to reshape is the habit of appreciating art, to free Chinese audiences from the conventional and stagnant habit of appreciating scholars' rock and to enable them appreciate contemporary art properly and to embrace the zeitgeist of our time, which is also what we try to promote at AroundSpace Gallery.